Key To Your Soul

Key To Your Soul 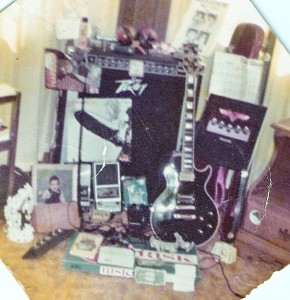 This project was Recorded at Double-a-productions Studio in Elysburg, PA (Owner, Al Paul). All songs and lyrics were written by Jim “Desi” Desiderati. The interpretation of these songs by each musician has evolved into one of the best musical journeys of my life. I am very grateful to have had such wonderful talent helping me with the recording my first CD.

This CD is a tribute to my family and friends for keeping me inspired:

40 years of dreams pouring into 4 studio sessions coordinated with text messages and pulled from old and new relationships over a 20-year period. The 1st session started with a right hand finger injury causing my middle finger to eventually swell to twice its size ending the night abruptly. Despite freezing temperatures, icy stairs, snow covered roads and limited time, this CD became a reality. Key To Your Soul represents a glimpse at a lifetime.

Follow my story from awkward self-consciousness through streetwise experimentation and into soul fulfilling work with Hospice as an RN. It is using music as an opportunity to finally express my emotions as sound. Forever taking second stage to the responsibility of work and school, music existed inside of me as a boiling broth of hope, passion, and ideas. I have been writing poems and songs for over 40 years.

In December of 2014 an alarm sounded in my soul and within two months this CD was completed. The relationships of a lifetime have contributed to this project with the help of long time friend and musician Al Paul, owner and operator of Double-a-productions studio. Having met in the mid 70’s, I have watched in distant awe as Al has made his way in the professional world of art using his talents as studio engineer, bassist, guitarist, teacher and all around musician. Al introduced me to Sean Madden who provides many of the percussion tracks having had only a few days to review the material. Calling into the past from old memories of sterile fields and impromptu solos, I enlisted the superb skills of saxman Ravi Evans who I met in the late 90’s and was even then surprisingly adept at his trade having given me a surprise concert with his sax and the seeds of respect blossomed into lasting friendship. Assisting with vocals is Frank Bressi. Watching and hearing his vocal power come to life with each track was one of the most moving musical experiences of my life. His interpretation of the lyrics on It’s OK To Believe was a first take, and the first time I ever heard him sing this song as it brought tears to my eyes while I sat in disbelief inside the sound console. Even though we had worked in the cover band Rock Therapy 5 years past I had never heard him singing with such emotion and range. The song order is not chronologically listed on the CD but the following will give you a little more insight into the origin of their birth:

And This is the story Key To Your Soul will tell.

Key to your Soul – written on 2-18-1996 the title track sees me as a child in hiding from the reality of what deception can do to our lives and eventually realizing that we all hold the key to our own freedom inside us. Inspired by a young patient I met who was experiencing similar family transitions as I had at the same age.

Razor Rat – 1-10-2001 tells the story of how a growing interest in guitar took possession of eager fingers with a quickly mumbled slice of advice from a sleep deprived friend I had hunted down after being spellbound by his playing the night before. “Learn where all your A’s are at” He said as he covered his head with his pillow and apologized in fading tones. I hope someday to be able to give him a copy of this CD!

Yupward Bound – 9-15-1990 written while working full time in a steel mill pouring molten metal from an overhead crane going on 16 years and now also an adult student in college with a plan of becoming a nurse if the overtime and school schedule didn’t kill me first.

Patience – 1-1993 captures the hopeless imagination of unattainable love we so often hear about and many of us may have experienced in our lifetime.

Mr Disguise – 8-1982 written at a critical turning point for my life and it is the chilling manifestation of the tortured remains that are left in the wake of a vengeful broken heart.

Nuthin’ Ventured –  3-7-1997 started from a dream I awoke from with the initial guitar riffs finding my fingers playing easily as old friends without hesitation one afternoon when I woke with my guitar by my side. The song begins to find the balance between the extremes of love and hate.

Hurts Sometimes  – 3-7-1997 written in acceptance of change and the beginning of the healing process after having faced the truth inside.

South Mountain Dreams –  6-23-1985 was written while sitting on the side of St mountain in Phoenix AZ one evening after moving there to rebuild my life. this song  once more brings hope to the surface as the healing continues and a recognition of empathy begins to strengthen a weakened spirit.

Traces Exist –  11-22-1984 initially just called Traces, the name was changed when put on this CD. It is a song written about the tragic loss of freedom abusive relationships can cause, and represents the hope that revives love as our strength in life and accepts the struggle to achieve peace as worthy of the pain we endure for it. Inspired by forbidden fruit in the timeless attraction that passion creates and memory clings.

Purchase Key To Your Soul
CDs are $10 each. Shipping is $3 for the first cd and $2.75 each for additional cds.